In 2011 the Food and Agriculture Organisation of the United Nations (FAO) estimated that globally 1.3 billion tonnes of our food is wasted or lost every year, accounting for a third of the food produced for human consumption [1]. However, with the increasing incidence of extreme weather events due to climate change and dwindling natural resources, the challenge of feeding a population of 9.8 billion by 2050 has never been greater. To achieve global food security we urgently need to increase the efficiency of our food system, and preventing food wastage is key.

The UK government has acknowledged that food wastage is a global public policy issue that requires urgent action worldwide [2]. However, the problem of food wastage is occurring on a national scale too. For example, a recent preliminary study by the Waste and Resources Action Programme (WRAP) found that every year £30 million of food wastage occurs within UK primary production of lettuces and strawberries alone [3]. But primary production is not solely responsible for our nation’s food wastage. 10 million tonnes of food is being wasted post-farm gate every year, of which 6 million tonnes is considered ‘avoidable’ [4].

My research involves the mathematical modelling of crop losses due to pests and diseases. However, I’m aware that the problem food wastage extends far beyond the farm gates, and thus, many of the solutions will too. To understand the problems of food waste across the whole supply chain and what we, the research community, can do to fix them, I organised a GFS-funded workshop for a multidisciplinary group of early career researchers. Each researcher brought a unique skill set, from plant sciences to law and engineering. We were also joined by a number of representatives from relevant stakeholders, including the CEO of AgriGrub, the Project Manager of Cambridge Global Food Security and the Environmental Manager from the University of Cambridge Environment and Energy sector.

The workshop began with a series of talks from four distinguished speakers – two from academia (Dr Mukesh Kumar from University of Cambridge and Dr Manoj Dora from Brunel University), and two from NGOs (Dr Bojana Bojzelj from WRAP and Dr Karen Luyckx from Feedback). The talks were followed by a discussion on the challenges of reducing food wastage in primary production. We considered a wide range of factors, including the properties of the farmland, the variety of cultivars, the types of seeds, the nutritional and water requirements of the produce, pests and diseases, defoliation, harvest storage and delivery from farm to factory. 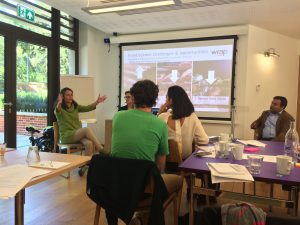 Next we explored the food wastage that occurs at the factory stage of the supply chain, typically due to processing inefficiencies that result in loss of nutritional value or food being discarded. We learned that measuring food wastage within factories and displaying the financial costs of wastage to the factory owners can provide strong financial incentives to improve practices to reduce waste.

Retailers also play a major role in the problem of food wastage, and we discussed a number of NGO-initiatives that are aiming to challenge and change the distribution of power within the food supply chain. Specific examples from farmers provided an insight into the power that supermarkets have on the quantity of food that is being wasted at this stage in the supply chain. The point was raised that while some food wastage is unavoidable, that doesn’t mean it can’t be put to good use. For example, surplus food can be used for pig feed, which could reduce the land required for EU pork production by 1.8 million hectares. Food waste can also be used to generate biofuels, which could reduce the emission of CO2 equivalent by millions of tonnes annually [5].

The morning of talks was closed with a systematic overview of food wastage across the supply chain. We learned that of all the players in the food system, the end consumer is responsible for the largest proportion of food waste in the UK, with an estimated 7.3 million tonnes of household food being wasted in 2015 [6]. However, it was noted that this figure also includes waste such as vegetable peelings, so reducing household waste is not just about preventing food spoilage or surplus, but also about identifying novel ways to utilise our food waste.

The second half of the workshop considered the key problems that give rise to food wastage. Many factors were considered, however the three greatest contributors to food wastage were identified as 1) lack of public understanding on the issues of food waste, 2) the power of the supermarkets, and 3) the lack of data and formal definitions of food waste. We all recognised the need for structural rather than individual solutions, as food waste is an issue across the whole food supply chain. We then identified three key actions that could achieve the necessary structural changes: 1) changing UK food legislation, 2) adjusting public behaviour, and 3) introducing smart technologies across the food supply chain.

It is evident that the research community will play an important role in implementing these actions. Solving the food wastage problem requires funding for scientific research that is aimed at reducing and re-purposing our food waste, and making sure any scientific breakthroughs reach the relevant stakeholders across the supply chain. This warrants effective knowledge transfer between the scientists, primary producers, industry, government and the public.

Workshops like this one are one such example of knowledge transfer, providing early career researchers with valuable contacts for future collaborations, shedding light on the complexities of problems within our food system, and broadening our perspectives from the tiny piece of the puzzle that we each work on every day to the bigger picture. Food security poses big challenges, and only through connecting with other researchers across the disciplines do we, the next generation of scientists, stand a chance of solving them.

Dr Ciara Dangerfield is a Post Doctoral Research Associate in Plant Sciences at the University of Cambridge. She is interested in mathematical modelling of biological systems, in particular how to incorporate uncertainty into mathematical models and the impact uncertainty has on the dynamics of the system. Her current research looks at how best to control a disease outbreak given that there is uncertainty in the future spread of the disease