Following the initial March workshop and independent group work, the second GFS Crop Climate Working Group workshop was held on 18th June 2019. This workshop developed further the themes and case studies identified in March, to demonstrate how joint working and future research between crop breeders and climate modellers can help address the identified gaps in knowledge and research. Discussions ranged from short term climate patterns impacting UK wheat production, integrated cropping systems and climate threats in India, and disease resistance and banana production in South America to longer term transformations to agricultural systems that are resilient to climatic changes. These case studies will be developed further and presented in a joint report, to be published later this year.

In March 2019 GFS brought together experts from crop breeding and climate modelling disciplines for the first Crop Climate Working Group workshop. Seventeen representatives from commercial companies, universities, the Met Office and research institutions across the UK joined the GFS team. The workshop was chaired by Dr Alison Bentley, Head of Genetics and Breeding at NIAB, and Professor of Climate Impacts Andrew Challinor from the University of Leeds.

Until now crop breeders and climate modellers have worked relatively independently, so the aim of this working group is to improve communication and information sharing between the two groups. This will provide climate modellers with a clear understanding of the type of information that crop breeders need, and will provide crop breeders with robust climate predictions enabling them to breed crops that are resilient and adaptable in the face of changing climates, ensuring the security of our future food system. Gaps in research or capability will be identified and shared with policy makers and research funders, through the use of world-wide case studies and by identifying cross cutting themes and opportunities. 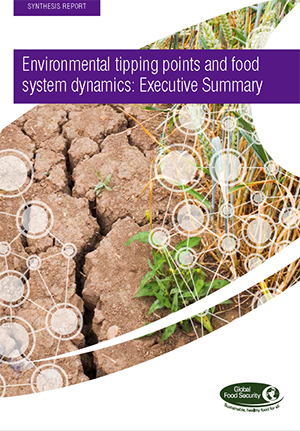 Environmental tipping points occur when a biophysical system shifts from one stable state to another, potentially bringing about changes in the provision of environmental goods and services. This report provides a summary of outcomes and recommendations from an inter-disciplinary and inter-sectoral working group considering potential impacts of tipping points within the food system. 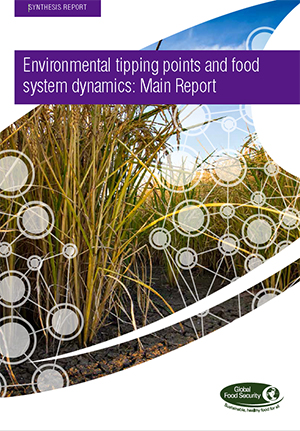 This report details outcomes and recommendations from an inter-disciplinary and inter-sectoral working group considering tipping points in the food system. Their work provides evidence for the existence of environmental tipping point as well as an exploration of their potential consequences for global food security and options for risk mitigation.

These reports were unveiled at a Parliamentary event attended by MPs, policy-makers, leading industry figures, researchers and funding agencies. 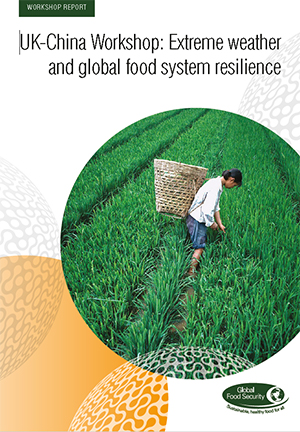 GFS collaborated with the Foreign and Commonwealth Office to hold the UK-China Workshop on extreme weather and global food system resilience. This workshop report provides an overview of how extreme weather might impact food production in China, how Chinese food policy and trade might affect the global market, and a number of shared future research priorities.

GFS established an inter-disciplinary and inter-sectoral working group of academics and industry experts to consider tipping points within the food system.

The findings of the UK-US Taskforce were presented at a session of the AAAS meeting 2016. The session panel also conducted a briefing on the taskforce findings for US Senate staff.

GFS collaborated with the Foreign and Commonwealth Office (FCO) in Beijing to hold the UK-China workshop on extreme weather and global food system resilience. 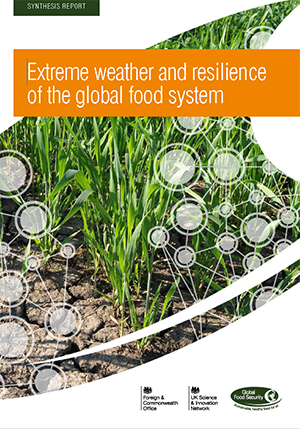 Extreme weather and resilience of the global food system

This synthesis report presents evidence that the global food system is vulnerable to production shocks caused by extreme weather, and that this risk is growing. Preliminary analysis suggests that the risk of multi-breadbasket failure from extreme weather will triple, going from a 1-in-100 year event to a 1-in-30 year event by 2040. A number of recommendations are made to improve resilience of the food system.

Download - Extreme weather and resilience of the global food system 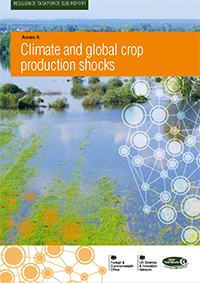 This report presents a set of scenarios for weather-driven production shocks that are plausible in the present or near future climate. This work highlights the risks extreme weather poses to global food production, recommending further investigation into the meteorological teleconnections between major food production regions and the probability of coincident shocks in multiple breadbaskets. 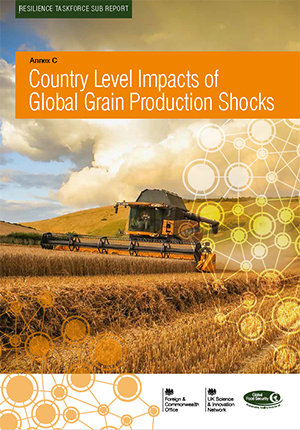 This report examines the impacts of potential extreme weather-related shocks to global grain production at a country level. Key recommendations include encouraging countries to take measures to reduce their exposure to grain production shocks, and more public-private partnerships to play a role in lessening the impact.

In 2014, GFS established a UK-US Taskforce on Resilience of the Agri-Food System to Extreme Weather Events in collaboration with the Foreign and Commonwealth Office (FCO) and Science and Innovation Network (SIN (PDF)).

Sir John Beddington commissioned a report on food system resilience from the UK’s Food Research Partnership, for which GFS coordinated an expert subgroup. 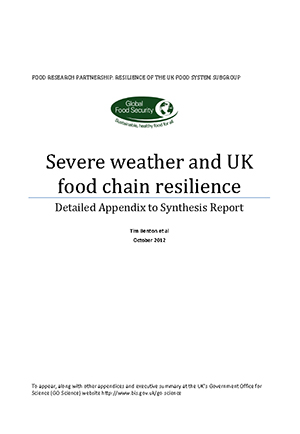 Following his illustration of the ‘perfect storm’ scenario, Sir John Beddington commissioned GFS to establish a programme of work considering the resilience of the global food system. A report on food system resilience from the UK’s Food Research Partnership was also commissioned, for which GFS coordinated an expert subgroup. This report details the work of this subgroup.

While there has been a wealth of research to better understand how the average global climate is changing, we have far less of an understanding of how the extremes of different weather variables – such as temperature and rainfall – may change.  Equally, relatively little attention is given to environmental tipping points and the need to include any such potential step-changes in ecosystem services as part of food systems risk management.

When considering resilience of the food system, the potential for climatic shocks such as extreme weather events or environmental tipping points are just as important as average changes in climate; for example, harsher heatwaves and cold snaps, more severe floods and droughts (ref 1), or more permanent step-changes in biophysical systems that alter the provision of environmental goods and services. These events have significant potential to negatively impact food production, disturbing food supply chains both locally to the shock and at a global level should a major production region – or global “breadbasket” – be affected (ref 2). In these cases, the associated drop in production can trigger rapid increases in global food prices, having serious consequences for global food security – increasing household food expenditure, reducing access to sufficient good quality food in poor communities, and even triggering civil unrest in areas with fragile governance. Therefore, finding ways to rise to the challenge of producing food for nine billion people by 2050 in an increasingly unpredictable climate is a key global priority.