Transformation of the food system could lead the way in addressing both climate and health goals. The Global Food Security programme’s Sian Williams introduces a new report.

Entering into force on 4 November 2016, the Paris agreement saw all 197 parties to the United Nations Framework Convention on Climate Change (UNFCCC) pledge to avoid dangerous climate change by limiting global warming to ‘well below’ 2°C and to ‘pursue efforts’ towards 1.5°C (ref 1).

The path to Paris has been long and complex; calls for a global treaty on climate change started over 40 years ago with the first World Climate Conference and the initiation of the Intergovernmental Panel on Climate Change. To this end, the Paris agreement is certainly a huge diplomatic success, but the most difficult stage of the process is still to come – establishing and initiating the pathways by which this ambitious agreement can be achieved.

Since the agreement was ratified in 2016, a number of weaknesses in international commitment to the agreement have come to the fore, particularly relating to the withdrawal of the USA (though due to the agreement mechanism this departure cannot fully take effect until 2020) and recent reports of inaccurate emissions data that may fundamentally undermine the value of emissions reductions (ref 2).

While this paints a very bleak picture of progress since the milestone set at COP21, we must use this as further reason to galvanise new research and mitigation action to avoid dangerous climate change – and food could lead the way.

The link between food and climate

The global food system as a whole – everything from food production, transport, manufacturing, retailing, to consumer consumption and waste of food across all these stages – is currently responsible for around 30% of total anthropogenic greenhouse-gas (GHG) emissions (ref 3). Projections show that food-related emissions at current levels could account for the entire carbon budget for a 2°C temperature rise by 2050 (ref 4).

It is important to remember that, in turn, climate change to this degree – including both average changes in climate as well as increased volatility of extreme weather events such as storms, floods, droughts, and hurricanes – has scope to seriously threaten food security in a number of ways, from causing serious production shocks and restricting food accessibility, to devastating livelihoods reliant on agriculture and the wider food sector.

Clearly business-as-usual within the agri-food sector is not an option if we are to support the Paris agreement, and indeed, food security itself.

The latest report in the Global Food Security programme Insight considers this opportunity to transform the global food system, presenting the case for ‘Paris-compliant healthy food systems’ that unite thinking around sustainability and nutrition to find systemic solutions that address both challenges simultaneously. 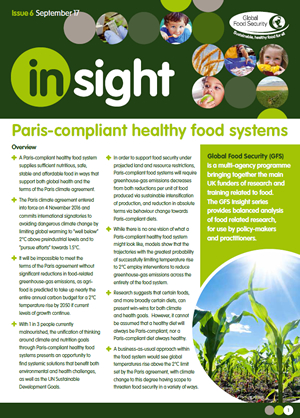 GFS Insight aims to offer a balanced and interdisciplinary representation of the current state of knowledge in a particular area relating to food security. This issue outlines the need for a food system that supports both health and the Paris climate agreement, exploring impacts of food production and consumption as well as potential interventions to reduce greenhouse-gas emissions across the system.

We already know a great deal about current GHG emission hotspots in the food sector, as well as some potential mechanisms to reduce emissions per unit of food product produced; for example, ruminant feed containing methane inhibitors has been shown to reduce dairy cow emissions by 30% without affecting animal growth or milk production (ref 5). Recent interest in sustainable intensification has driven development and implementation of such efficiency improvements, greatly supporting a move towards Paris-compliant food production.

However, research shows that trajectories with the greatest probability of successfully meeting the Paris targets will include interventions to reduce greenhouse-gas emissions across the entirety of the food system, making reductions in absolute terms as well as per unit of food. This means a move towards Paris-compliant diets will be necessary to keep within 2°C; encouraging diets that are moderate in terms of absolute demand for food, including through waste, and moderate in consumption of foods associated with higher emissions and resource use such as meat, dairy, and dairy alternatives.

While it can’t be said that Paris-compliant diets are always healthy – for example, sugar is comparatively low in GHG emissions but must be limited in a balanced diet – there are certainly synergies. Evidence shows that if UK diets aligned with World Health Organisation recommendations, national greenhouse-gas emissions would drop by 17% (ref 6) and average life expectancy increase by 8 months (ref 7).

There is no one silver bullet by which Paris-compliant healthy food systems can be achieved and no one view of what this kind of system would look like in practice. Further research is needed to understand Paris-complaint systems in a more holistic way, tying down the optimum mixture of pre and post farm-gate interventions that will give the best chance of meeting Paris targets while still supporting food security and health.

Global Food Security is working to meet this challenge. Having previously held an interdisciplinary workshop (PDF) to gauge thinking across the food sector on Paris-compliant and healthy systems, we are now initiating an expert taskforce to further advance this agenda. Through a global scenario mapping exercise the taskforce will develop a set of plausible Paris-compliant and healthy food futures, also highlighting potential needs and implications for research, policy and practice.

We hope that by building a clearer picture of what a Paris-compliant healthy system might actually look like, this work will inspire and support transformation towards a Paris-compliant and healthier food future.

3 thoughts on “Can food help in the battle against climate change? An Insight on Paris-compliant healthy food systems”

Changing the tide in aquaculture: lessons from nature for seafood resilience

Read more - Changing the tide in aquaculture: lessons from nature for seafood resilience

UK Research and Innovation (UKRI) in partnership with government recently launched a £5 million call to support a Centre for Doctoral Training (CDT) focused on developing the next generation of interdisciplinary food systems thinkers.

**Deadline extended to 28 July 2020** for our £5M Centre for Doctoral Training in #FoodSystems. Training the next generation of food system thinkers through interdisciplinary PhDs, with placements in business, government and civil society organisations. bbsrc.ukri.org/funding/filter…

Massive congratulations to the winner of our #SpeakUpFFS2020 Research Storytelling competition @m_hazenbosch with her brilliant story on growing #sweetpotatoes in Papua New Guinea 🌟 pic.twitter.com/DvkOre9ClR

Delighted to announce that one of our 2019 #SpeakUpFFS cohort is also taking to the stage at #CamSciFest next Wednesday! @HamishSymington's research explores how we can harness insect pollinators to boost food security 🦟🌻🌾 Get your tickets here👇 sciencefestival.cam.ac.uk/eve…

SPF food systems programme call 1 update: The outlines invited to the full proposal stage have now been published. If you are from a stakeholder organisation and would like to collaborate on one of these projects, please contact the PI. bbsrc.ukri.org/documents/invi… #foodsystems pic.twitter.com/JLMU5nqaJ2

Calling all #Cambridge folks! Next week Tuesday (10th at 19:15) we are bringing the final of our #SpeakUpFFS2020 competition to Cambridge Science Festival! Come along for an enthralling evening of research-inspired #storytelling👇 sciencefestival.cam.ac.uk/eve… #CamSciFest #FoodSystem pic.twitter.com/vkLhFJVaQF